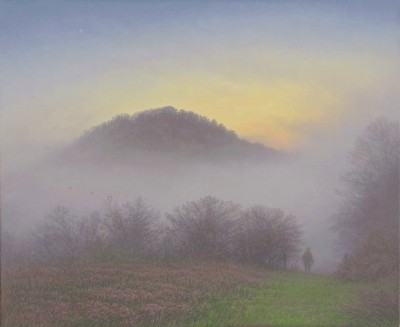 Steven Outram RBA was born in Dartford, Kent in 1953. Steven studied contemporary art at Medway College of Art, graduating in 1973.

As a young artist Steven Outram started exhibiting his contemporary paintings in modern art galleries before graduating from Art College. Since leaving Art college Steven Outram has spent his entire career as a professional artist.

Steven Outram was described as a 'mood painter par excellence' by an Art Review critic at his first one man contemporary show in London. Outram's contemporary paintings are representations of states of mind using naturalistic imagery. Typically Outram responds with feeling to the changing natural effects of climate and skies over simple Gloucestershire land forms His contemporary paintings survey the infinite potential of seeing the extraordinary in typical aspects of British landscape.

Steven Outram exhibited at five solo art exhibitions in London between 1979 and 1986. This led Outram to showing his paintings Internationally with shows in New York and Seattle.

Steven Outram has continued to exhibit in modern British art galleries and was elected a member of the Royal Society of British Artists (RBA) in 2003. In the same year Outram's painting won him a place in the 'Not The Turner Prize Exhibition', held at the Mall Galleries which attracted over 10,000 entries. The following year another painting by Outram won him a prize in the 2004 Exhibition. It was a contemporary landscape painting 'The Climb'.

In addition to annual exhibitions with the RBA Steven Outram has also exhibited frequently with other British Art Societies including the New English Art Club, the Pastel Society and the Royal Institute of Oil Painters.

Artist Steven OUTRAM is one of a growing number of artists whose modern art works feature at Red Rag Gallery in Bath. Modern art work from Steven OUTRAM is regularly exhibited at the Bath art gallery which also offers an extensive choice of modern art, contemporary sculptures and collectible art prints from other present day artists.

For larger images plus price and size information about modern art works from Steven OUTRAM which are featured on this page simply click on the image of each art work. Art works for sale from Steven OUTRAM can be viewed at Red Rag Gallery in Bath which is open seven days a week for sales of modern art from present day artists

Should you wish to buy or require further information about modern art from Steven OUTRAM please contact/email Red Rag Modern Art Gallery or alternatively contact Red Rag on the number below.