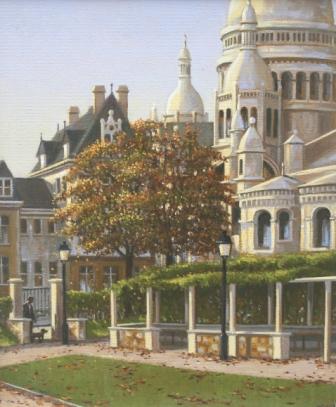 In the 1970's Robert Crisp moved to Devon to concentrate on painting and on picture restoration. Crisp began painting full-time in 1992. Since then Robert has had a number of one man art shows including a major exhibition in 2000 "Paris in the Autumn". His art works have also been featured at the Mall Galleries and the Royal Academy Summer Shows.

Inspiration for Robert Crisp paintings has historically come from the urban landscape with its light, architecture and city life. He paints the architectural wonders of the urban, man-made landscape with its symmetry, balance, detail and imposing grandeur. From the wonderful buildings of London, Paris, Venice and so many more cities, to the quaint villages and harbours, man has created his own landscape. More recently Crisp has recently become inspired by the timeless beauty of the Suffolk landscape, its light, wide-open spaces, low horizon, big skies and the reflections on the water

Robert Crisp paintings clearly show that his skills lie in the ability to execute exquisite attention to detail and capture the very essence of urban life. His work is eminently collectable and can be found in private and corporate art collections throughout the UK and Europe.

Paintings from Robert Crisp are available at the Red Rag Art Gallery in Bath.

Artist Robert CRISP is one of a growing number of artists whose modern art works feature at Red Rag Gallery in Bath. Modern art work from Robert CRISP is regularly exhibited at the Bath art gallery which also offers an extensive choice of modern art, contemporary sculptures and collectible art prints from other present day artists.

For larger images plus price and size information about modern art works from Robert CRISP which are featured on this page simply click on the image of each art work. Art works for sale from Robert CRISP can be viewed at Red Rag Gallery in Bath which is open seven days a week for sales of modern art from present day artists

Should you wish to buy or require further information about modern art from Robert CRISP please contact/email Red Rag Modern Art Gallery or alternatively contact Red Rag on the number below.