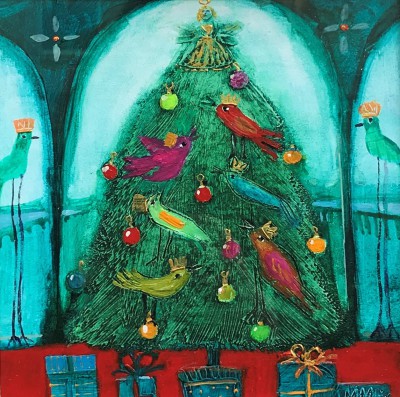 Morag Muir was born in Glasgow in 1960. She studied Fine Art at Duncan of Jordanstone College of Art in Dundee, graduating in 1982. Her tutors included Alberto Morroco and Dave McClure. A year later Morag completed a year of postgraduate study in 1983, winning the John Milne Purvis Prize and the Major Travelling Scholarship, which financed further study in Italy.

After graduating Morag Muir successfully balanced a career painting and lecturing. Increasing demand for her art work later resulted in Morag concentrating her efforts on painting and she is now a full-time artist.

In recent years Morag Muir's paintings have become more colourful, often echoing the hues of Eastern iconography and early Christian art. Recurring themes to her work include stained glass windows, flowers, textiles and ethnic bric-a-brac share the canvas, populating sometimes curious, ambiguous spaces. As much as anything Morag Muir is motivtaed by the sheer joy of painting. She enjoys the physical act of mixing colour and media to achieve specific textures and transparencies and the constant challenge of communicating her personal aesthetic in physical form.

In addition to Red Rag Gallery Morag Muir has exhibited at numerous venues throughout Scotland and the U.K. Each painting at Red Rag is sourced from the Morag Muir artist studio and like all Red Rag Scottish art it can be shipped worldwide.

Artist Morag MUIR is one of a growing number of artists whose modern art works feature at Red Rag Gallery in Bath. Modern art work from Morag MUIR is regularly exhibited at the Bath art gallery which also offers an extensive choice of modern art, contemporary sculptures and collectible art prints from other present day artists.

For larger images plus price and size information about modern art works from Morag MUIR which are featured on this page simply click on the image of each art work. Art works for sale from Morag MUIR can be viewed at Red Rag Gallery in Bath which is open seven days a week for sales of modern art from present day artists

Should you wish to buy or require further information about modern art from Morag MUIR please contact/email Red Rag Modern Art Gallery or alternatively contact Red Rag on the number below.