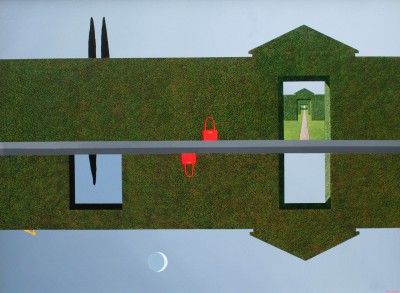 Michael Kidd was born in London in 1937. He studied at Wimbledon School of Art where he gained a scholarship to the Royal College of Arts. Fellow art students included the film director Ridley Scott and artist David Hockney. After leaving the Royal College of Art Kidd worked as an art director in some of London's leading advertising agencies before moving the USA.

In 1966 Michael Kidd moved to New York to work as a creative director. Following his return to the UK he began directing T.V. and Cinema commercials in Europe, America and the UK and undertaking work for British Airways, Coca Cola, Lloyds and Barclays Bank, Ford Motor Company and many more.

From 1981 Michael Kidd began painting between film shoots. Slowly painting became more important to him and more people started to buy his modern art. As a result Kidd eventually gave up directing to become a full-time artist.

Michael Kidd says he tends to 'think in terms of numbers'. He is facinated by 'patterns and mathematics, the poetry of the indecipherable'. Kidd's modern art shows his characteristic pleasure with what he calls 'playing with different perspectives - giving the illusion of the reality, and keeping it simple'.

Artist Michael KIDD is one of a growing number of artists whose modern art works feature at Red Rag Gallery in Bath. Modern art work from Michael KIDD is regularly exhibited at the Bath art gallery which also offers an extensive choice of modern art, contemporary sculptures and collectible art prints from other present day artists.

For larger images plus price and size information about modern art works from Michael KIDD which are featured on this page simply click on the image of each art work. Art works for sale from Michael KIDD can be viewed at Red Rag Gallery in Bath which is open seven days a week for sales of modern art from present day artists

Should you wish to buy or require further information about modern art from Michael KIDD please contact/email Red Rag Modern Art Gallery or alternatively contact Red Rag on the number below.