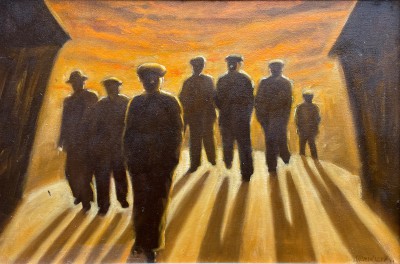 Ken White was born in Swindon in 1943. At the age of 15 he left school and followed in the footsteps of his Father and Grandfather by working in the yards of the Great Western Railway. Ken started as a rivet hotter but later became a signwriter.

At the age of 17 Ken White's interest in art led him to take evening classes at Swindon Art School where he passed A-level art. He then moved to London and became a commercial illustrator, designing magazine and book covers. A chance meeting with a young entrepreneur named Richard Branson resulted in Ken being asked to paint a mural for a London recording studio. Branson was so impressed that he paid White a retainer for the next 26 years as his personal mural artist. He travelled all over the world, meeting many of the famous musicians and rock stars of the day, and creating murals at Virgin recording studios, mega-stores, hotels and in the Virgin airport lounges.

Today Ken White is perhaps best known for his murals, sited in a wide variety of locations all over the world. He has painted over one hundred murals, but perhaps the most recognised art work is his painting of the “Scarlet Lady” featured on the nose of every Virgin aircraft. Although mural work has provided a living, Ken White has always been, first and foremost, a painter and is now recognised for his art works on canvas. He recreates on canvas industrial landscapes of historic railway working scenes many depicting factory workers with their flat caps on their way to and from the factories. They are scenes he remembers well from his childhood.

Commenting on the increasing appeal of paintings Ken White said: “I think people like scenes of how things used to be." His paintings are now in art collections throughout the world including the USA and Canada.

Artist Ken WHITE is one of a growing number of artists whose modern art works feature at Red Rag Gallery in Bath. Modern art work from Ken WHITE is regularly exhibited at the Bath art gallery which also offers an extensive choice of modern art, contemporary sculptures and collectible art prints from other present day artists.

For larger images plus price and size information about modern art works from Ken WHITE which are featured on this page simply click on the image of each art work. Art works for sale from Ken WHITE can be viewed at Red Rag Gallery in Bath which is open seven days a week for sales of modern art from present day artists

Should you wish to buy or require further information about modern art from Ken WHITE please contact/email Red Rag Modern Art Gallery or alternatively contact Red Rag on the number below.