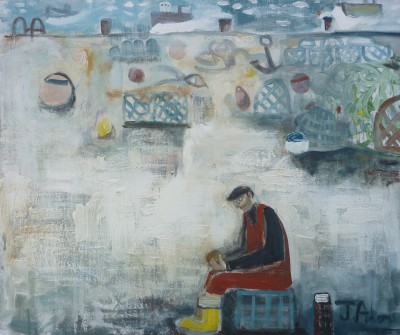 James Newton Adams was born in London in 1971.He studied Fine Art (Sculpture) before starting his own business designing and making metal furniture and products for the retail market. He also undertook various private commissions from architectural ironwork through to product design and sculpture, teaching himself the rudiments of Blacksmithing along the way.

In 2004 James Adams decided to return to his roots in sculpture and painting. He set up a workshop based in the Highlands of Scotland and also began painting from a studio on the Isle of Skye.Since then he has produced paintings which are very much influenced by the Expressionism, Folk and British Naive Art from the early and mid-20th century including artists Alfred Wallis and L S Lowry

James Adams paintings display a sense of immediacy. This is acheived by applying layers of quick drying acrylic paint that builds up translucent areas of colour from an initial pencil sketch. Often James will allow the pencil outline of the painting to show through, creating an almost graphic account of the subject. He limits his colour palette to only a few colours which helps reinforce the simplicity of form, in turn creating a balanced and rhythmic composition.

Talking about his work James Adams says: "My paintings explore the land and seascapes of Scotland as well as the people, animals and objects that inhabit them, often highlighting tensions in their relationships with each other and with the landscape itself. I work from memories of places, drawing upon a narrative within. This allows me to build a painting composition around a theme - the title will as often inform the work as the other way round. The perspectives in my paintings are the perspectives of memory, in which different stages of a narrative may be seen simultaneously or a scene may be viewed from above as if in a dream or a map."

In addition to Red Rag Gallery, James Newton Adams has also exhibited at other leading Scottish art galleries. These include the Annual Exhibitions of the Royal Glasgow Institute of The Fine Arts and Paisley Art Institute. Each painting at Red Rag is sourced from the James Newton Adams artist studio and like all Red Rag Modern art and Contemporary art it can be shipped worldwide.

Should you wish to buy or require further information about modern art from James Newton ADAMS please contact/email Red Rag Modern Art Gallery or alternatively contact Red Rag on the number below.