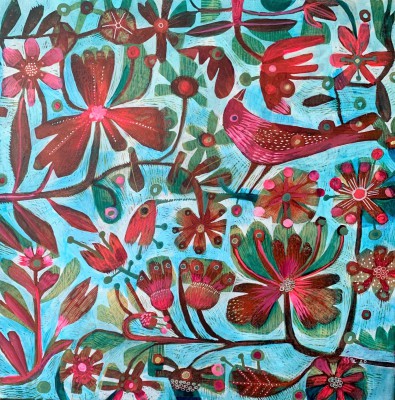 Este Macleod was born in Pretoria, South Africa in 1968. From a young child all she wanted to do was draw and paint. After completing her schooling Este continued to study art at the Pretoria Technikon and in 1994 she obtained a Higher National Diploma in Textile Design.

Este MacLeod began her career in South Africa as a textile designer and ceramicist. She relocated to the UK in 1999 where she has continued to paint, exhibit and create her ceramics. More recently she completed an MA at University for the Creative Arts in Farnham.

Through her art work Este MacLeod reflects on the sentiments and nostalgia surrounding the on-going process of life. She is primarily a colourist painter focusing on the concept of domesticity. Vintage household objects, simplified plant and natural forms inform Este's still life and landscape paintings. Her aim is not to represent objects, but to interpret everyday items in a distorted way. She simplifies recognisable everyday objects by including working methods such as the use of lines, complimentary colours and layering of paint and by a variety of scraping techniques. She uses complimentary colours, layered paint and a variety of scraping techniques to add texture to her paintings.

Este MacLeod exhibits in the UK and abroad on an ongoing basis throughout the year. Her paintings and sculptures are in public and private collections around the world.

Artist Este MacLEOD is one of a growing number of artists whose modern art works feature at Red Rag Gallery in Bath. Modern art work from Este MacLEOD is regularly exhibited at the Bath art gallery which also offers an extensive choice of modern art, contemporary sculptures and collectible art prints from other present day artists.

For larger images plus price and size information about modern art works from Este MacLEOD which are featured on this page simply click on the image of each art work. Art works for sale from Este MacLEOD can be viewed at Red Rag Gallery in Bath which is open seven days a week for sales of modern art from present day artists

Should you wish to buy or require further information about modern art from Este MacLEOD please contact/email Red Rag Modern Art Gallery or alternatively contact Red Rag on the number below.