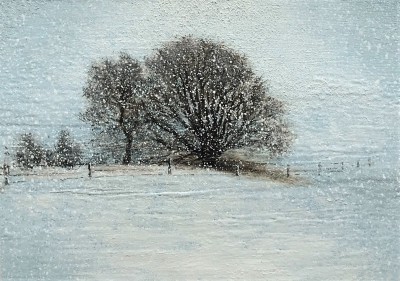 Donald Provan was born in Scotland in 1964. He is a graduate and postgraduate of Edinburgh College of Art and graduated with a BA (Hons) degree and a post-graduate diploma in Drawing and Painting in 1987.

Donald Provan's art work is largely associated with water, divided neatly between those paintings concerned with 'above' the water and those, always tightly observed fish, concerned with the world below the surface. Has developed a strong and deserved reputation for his large, powerful landscape paintings and also for his superb paintings of fish. He displays a subtle mastery of tone and texture in his modern art works. Often using a limited palette of blues, greys, tans and the softest of browns Provan creates paintings with enduring appeal and the highest quality.

Donald Provan's landscapes often feature the shorelines of his native Scotland notably around East Wemyss, an old mining village where he used to fish as a boy. But people rarely feature in his landscapes, these are paintings about places where land and water meet and are executed with meticulous skill. His paintings successfully capture the intricate patterns of sky, sea and shingle but are less a record of how things actually look than an account of a particular way of seeing.

Donald Provan has had several solo shows and widely exhibited in group shows across the UK. A regular prize winner, he was awarded the David Cargill Award and the 2002 Cuthbert Award for 'New Young Artist' from the Royal Glasgow Institute. He has also received a Grant from The Scottish Arts Council, two from the Elizabeth Greenshields Foundation, Canada.

In addition to Red Rag Art Gallery Donald Provan's art work has been exhibited at a number of leading Scottish Art Galleries including the Royal Glasgow Institute. His paintings are held in both public and private art collections in the UK and Internationally. Each painting at Red Rag is sourced from the Donald Provan artist studio and like all Red Rag Modern art and Contemporary art it can be shipped worldwide.

Artist Donald PROVAN is one of a growing number of artists whose modern art works feature at Red Rag Gallery in Bath. Modern art work from Donald PROVAN is regularly exhibited at the Bath art gallery which also offers an extensive choice of modern art, contemporary sculptures and collectible art prints from other present day artists.

For larger images plus price and size information about modern art works from Donald PROVAN which are featured on this page simply click on the image of each art work. Art works for sale from Donald PROVAN can be viewed at Red Rag Gallery in Bath which is open seven days a week for sales of modern art from present day artists

Should you wish to buy or require further information about modern art from Donald PROVAN please contact/email Red Rag Modern Art Gallery or alternatively contact Red Rag on the number below.