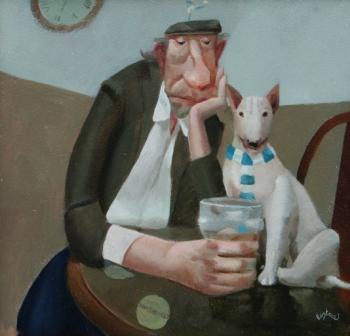 David Eustace (1950-2021) was encouraged by his school art teacher to follow an artistic career but financial constraints forced him to take up a carpentry apprenticeship. It was only some years later, when he was twenty-one, that he was able to return to education. He completed a Foundation course at Sutton Coldfield Art College, followed by a degree course in Fine Art at Exeter College of Art. David later went on to Leicester Polytechnic in 1976 and trained as a teacher.

After graduating, David spent six years in the USA working as a muralist. After returning to the UK in 1986 David earned his living as a painter and musician - for 25 years he was the drummer in the blues band 'Junkyard Angels'. He later played in a jazz quartet called 'Shufflebones'.

David played with the viewers of his figurative painting, using images that hover between conscious and subconscious states. Eustace produced a mixture of wit and mysticism. In his view, painting was like music. "Often the artist or composer intends to form a beginning, middle and an end but finds himself drawn off in a slightly different direction to make his creation look or sound right. It is, he says, a philosophical experience, which is easier felt than telt."

David Eustace said "It was only when I stopped working from life that my paintings became my own. For me imagination is the touch stone to explore an inner world of feelings and dreams."

Over the years David developed a number of themes which he gravitated towards in a fairly random fashion. Eustace found if he stayed with one theme too long his interest waned.

David Eustace observed the everyday world around him but presented it with an individual style and viewpoint. Subjects were sometimes dislocated from their surroundings or hovered lending an air of mystery. There was a three-dimensional dream-like quality to his contemporary art. Painting with acrylic on board David overlayed this with a light oil glaze to enhance depth and colours.

David Eustace was awarded membership of the Royal Society of British Artists in 2003 and in the same year was the winner of the RBA David Wolfers Memorial Prize.

Artist David EUSTACE is one of a growing number of artists whose modern art works feature at Red Rag Gallery in Bath. Modern art work from David EUSTACE is regularly exhibited at the Bath art gallery which also offers an extensive choice of modern art, contemporary sculptures and collectible art prints from other present day artists.

For larger images plus price and size information about modern art works from David EUSTACE which are featured on this page simply click on the image of each art work. Art works for sale from David EUSTACE can be viewed at Red Rag Gallery in Bath which is open seven days a week for sales of modern art from present day artists

Should you wish to buy or require further information about modern art from David EUSTACE please contact/email Red Rag Modern Art Gallery or alternatively contact Red Rag on the number below.