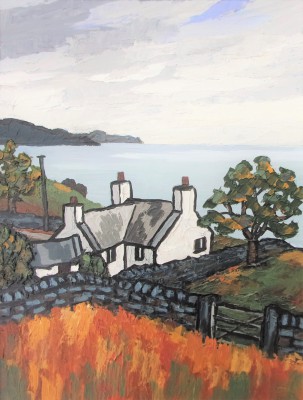 David Barnes was born in Africa and spent his early childhood there. He qualified as a chartered accountant and spent most of his working life in professional practice. In his forties David took an Open University degree in history and economics. He then worked for several years as a tutor for the Open University, running seminars in the UK, Europe and Africa on financial management on the MBA programme.

Although David Barnes enjoyed art at school and has been an art collector for many years, it was not until he retired from the Educational world in 2006 that he began to paint seriously. Nevertheless, he progressed quickly, earning his rapid success after spending many hours in the studio. His earliest days as a painter was very much shaped by the goal of emulating the Welsh artist Kyffin Williams.David was fascinated by the brooding landscapes and sombre colours so evident in Kyffin Williams paintings. As a result he began to look into the background of the artist and was lucky enough to be invited to a private viewing where to his delight he met the artist Sir Kyffin Willims. However, he soon became fascinated by the art work of other Welsh artists and the work of the French Impressionists.

Talking about influences to his work Barnes says: “When I did a bit of research I discovered that some of the early Impressionists - for example, Van Gogh - started using the palette knife. I went over to the Van Gogh museum in Amsterdam and when you see his paintings in the flesh you can actually see the palette knife strokes which he used. The visit proved very useful in the learning curve.”

The result of these broadening influences, coupled with David's continued experimentation with paint, has been the emergence of a distinctive style of his own. Barnes captures the greys and browns of a North Wales landscape with brooding intensity, but he also utilises arresting splashes of colour reminiscent of the Scottish colourists. His paintings are highly textural. He uses a palette knife, painting in oils and using a thick impasto technique to produce bold strokes that add strength and texture to his paintings, giving it a sculptured feel.

The inspiration for much of David Barnes art work are the mountains of Snowdonia and the coastline of north Wales and Anglesey. As well as painting the dark brooding colours of the north Wales landscape, David is increasingly finding his own individual style, using more vibrant colours and painting other landscapes in Scotland, Cornwall and Ireland. He is also an enthusiastic painter of still life subjects.

Human beings have always had an intimate relationship with the water. Given the amount of the earth’s surface which is covered in water and the often unpredictable and life-changing nature of the sea, it is little wonder that seascapes have been such a popular subject for so long and no surprise that seascape paintings have an important place in the history of art.

Seascape paintings have a long history in both the Eastern and Western worlds.The walls of homes have been adorned with seascape paintings since the art of the secular painting first began to overtake religious works in numbers and importance.

As a country with an extensive coastline, paintings of seascapes have always had a special attraction to Modern artists. All the seascape paintings at Red Rag showcase the talent of Modern painters and their ability to depict changing light on water and rapidly altering climatic conditions. Many of the Modern artists who have painted these seascape paintings are also talented landscape painters, or worked in other genres as well as seascapes, such as still life or portraiture.