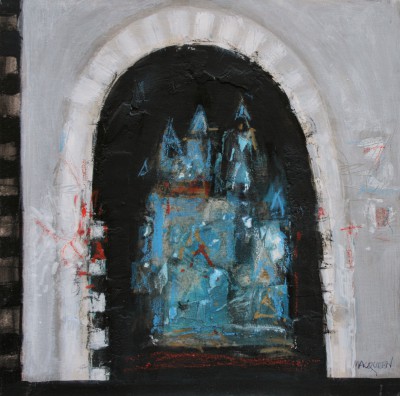 Charles MacQueen was born in Glasgow in 1940. He was educated at St Aloysius College and then attended the Glasgow School of Art.

After graduating from Glasgow School of Art in 1965, Charles MacQueen pursued a successful career in Art Education. Throughout his teaching years Charles continued to paint and exhibited widely. Eventually in 1990 Charles retired to concentrate full time as a professional artist.

Charles MacQueen paintings can be extremely textured. He uses textured levels of paint and gesso to create the feeling, sensation or experience of specific places. Charles says of his paintings "The forms I use are forms remembered or dreamt about. The stark visual contrasts of moving between strong blinding sunlight and dark bazaars full of rich reds, golds and turquoise inhabit my paintings. This is like being put down to sleep in a darkened room with strong sumlight streaming through the shutters. This is not representation but an evocation".

Should you wish to buy or require further information about modern art from Charles MacQUEEN please contact/email Red Rag Modern Art Gallery or alternatively contact Red Rag on the number below.